Looking to take your idea to that next level?
Get in touch!
Tweet Pin It

DesertBoard.com, my prerunner forum project has been growing a lot lately. If you’re interested in prerunners, trophy trucks, or other off-road racing activities, or enthusiast sports, DesertBoard is the place to be!

A prerunner is a truck that can be taken off road (comfortably, or not) and is street legal. A prerunner truck can range from stock, to mild, to wild. A prerunner does not have to be a $150,000 custom-built “prerunner” car built by a big name shop. A decent off-road capable vehicle with a few nice aftermarket upgrades is sufficient for prerunner duties.

A Prerunner is generally used for exactly what the name describes it as, to “pre-run” the course before the race starts. Generally a prerunner truck is the truck (or buggy) the racer, or navigator, will take to check out tough sections of the race where he’ll be coming through later WOT (wide open throttle) in the race vehicle.

Join Other Desert Racing Enthusiasts on the Forums

DesertBoard features discussion topics of all sorts catered to desert and off-road enthusiasts; if you love dirt, getting air, or just riding, you’re sure to find something to talk about.

Here’s a short history of “Desert Racing” from WikiPedia: 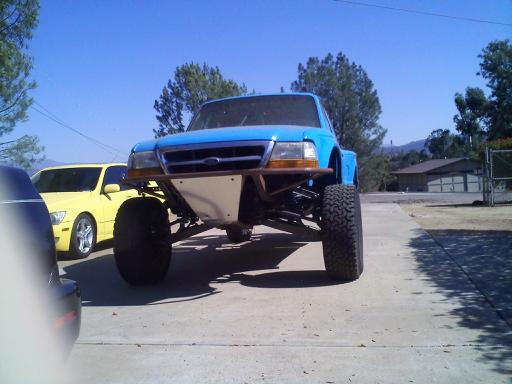 t racing is the act of racing through the desert in a 2 or 4 wheeled off-road vehicle. Races, which are generally comprised of two or more loops around a course covering up to 40 miles, can take the form of Hare and Hound or Hare scramble style events, and are often laid out over a long and harsh track through relatively barren terrain.

Point to point style races, including the famous Baja 1000, attract nationally-ranked and celebrity drivers. This type of racing tests the endurance and capabilities of racer and machine, and while organized clubs or teams sometimes field multiple sponsored riders for particular events, desert racing in its purest form is largely an individual endeavor. Winning racers accrue points to advance their rank and placement in future contests.

Desert racing vehicles, which include rugged enduro style motorcycles, four wheeled “quads”, heavily-modified pickup trucks, and dune buggies, have specialized suspensions with increased wheel travel. [1] The now-defunct Barstow to Vegas, which ran from 1964-1989, was a well known example of desert racing in North America. Desert racing, in its most organized form, began in Southern California in the 1920s

My Other Posts
Chase Gassert is founder and CEO of Chase Ideas, the parent corporation of many popular online services and brands. As a serial entrepreneur and managing partner in several companies, he's driven by a life-long passion to change the world in a positive way, and possesses an unnatural ability for anything tech.